25 °C
View Around the world on joshuag's travel map.

As I walked through a busy park in the center of Aleppo, I was greeted by the scrutinising glare of former president Assad. Actually, having had no luck determining my position from various non-English speaking locals, former President Assad's statue became the perfect landmark which I could reference in my Lonely Planet map. 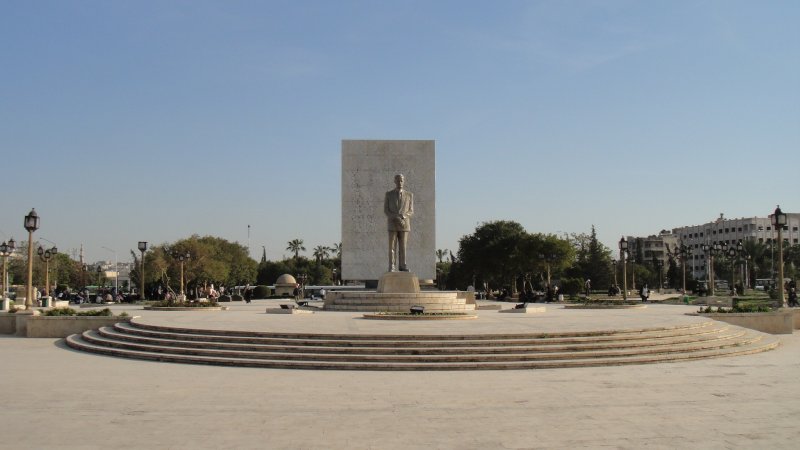 Statue of former President Assad at center of park in Aleppo

Aleppo was to be my last destination in Syria as it was poised conveniently near the border with Turkey - but it wasn't just a convenient stop-over city, it was well worthwhile visiting based on its own merits and I quite enjoyed it. My visit didn't begin without its problems however, as I soon realised that getting a hotel room in the city was going to be rather difficult. I had been overconfident (and disorganised) when I left Hama, so I hadn't booked anywhere to stay in Aleppo. By bad luck it turned out to be a public holiday in Syria and this resulted in a torturous walk through the city for several hours trying to find a hotel that had vacancies.

It was quite a relief when I did finally find a room... until I stepped inside... 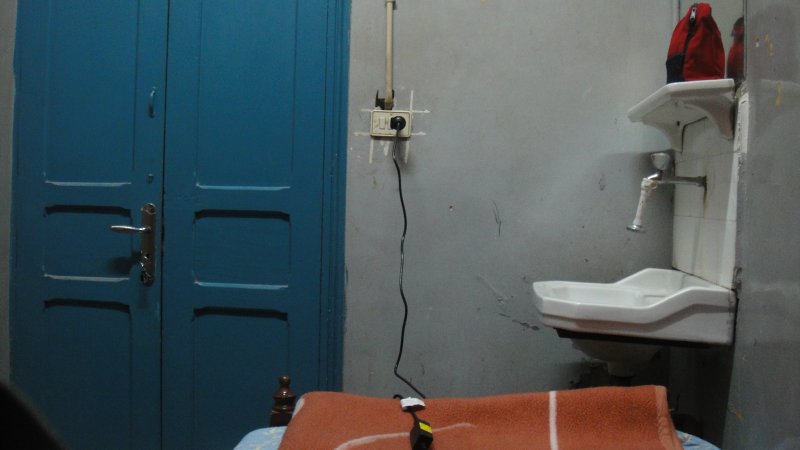 My room at Hotel Al-Andaloss on my first night in Aleppo, can't see it in this photo but to the left a rickety old table (no chair) and above me, at least a dozen hovering mosquitos waiting for me to close my eyes - What can I say, beggars can't be choosers

The guy at this hotel wanted to keep my passport until I checked-out and he took quite an offence when I told him I'd rather he didn't. After a lengthy "debate", he finally relented and begrudgingly returned it to me but only after copying down every last detail. I wasn't in the mood to alert him to the fact that he'd mistakenly noted down all the details from my U.S. visa page instead of my main photo page.

That night I stepped out onto my room's balcony (yes, at least it had a balcony) to take in a bit of the city at night and I saw and heard a man standing across the street yelling out periodically while holding what looked like a whole bunch of socks in his arms. There's no better proof to all the walking around I've done on my trip than my holey socks. Almost every pair I had was stricken with at least one toe revealing crater and this was proving to be rather embarassing whenever I had to take my shoes off at mosques or guesthouses. So due to a mixture of necessity and my pity for the poor socks merchant (who hadn't made a single sale for the whole time I'd been watching him) I raced across the road and bought three pairs from him. Even better for the guy, my purchase prompted further business from other passers by and within a few minutes he'd sold several more pairs. 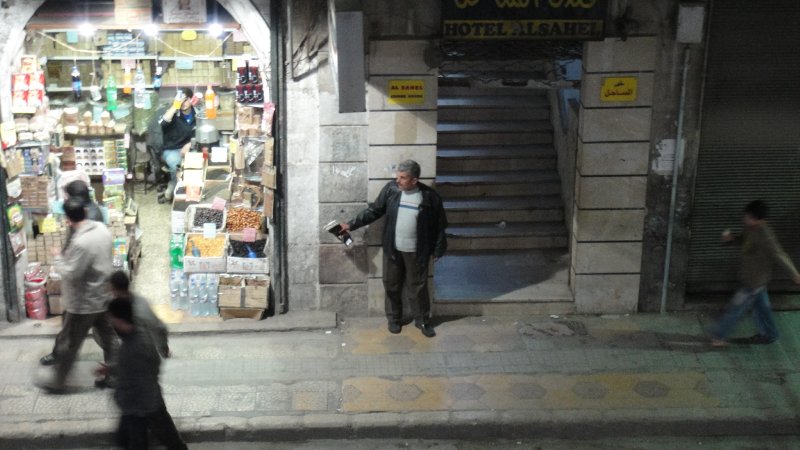 The next day I was on a hunt for a different hotel because the room I'd stayed in the previous night would have driven me to antidepressants if I'd stayed any longer. It was at that point that I decided, for the second time in my journey, to splurge on a hotel (the last time was in Mumbai at the start of February) and what better place stay at but in Hotel Baron, the oldest and most famous hotel in Syria. Apparently the Hotel Baron in Aleppo has witnessed a century of Syrian history and has hosted various political leaders and cultural figures, including kings, presidents, writers, adventurers and spies.

According to wikipedia, these are some of the famous guests of the Hotel Baron:

Yeah you got me, I added the last one - so it's also hosted a lot of nobodies. 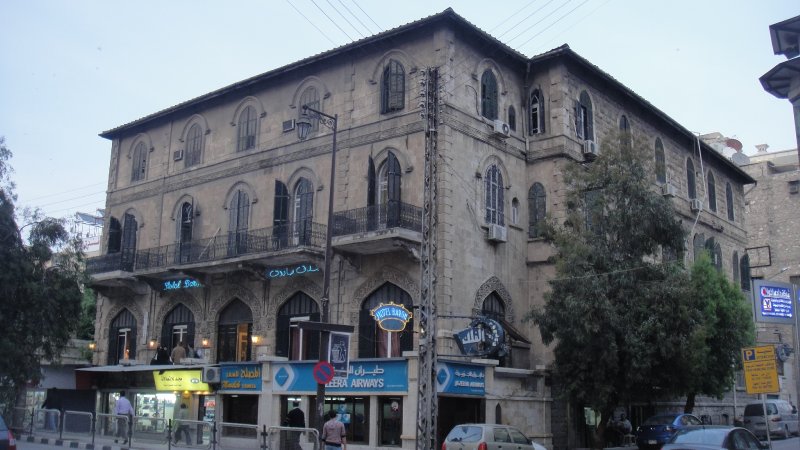 The famous Hotel Baron in Aleppo 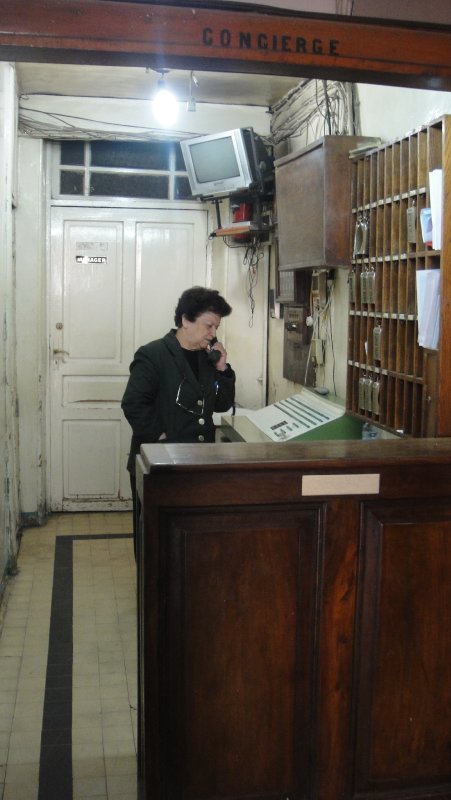 The concierge at Hotel Baron - I have to admit, she was posing for me while pretending to talk on that awesome antique switchboard 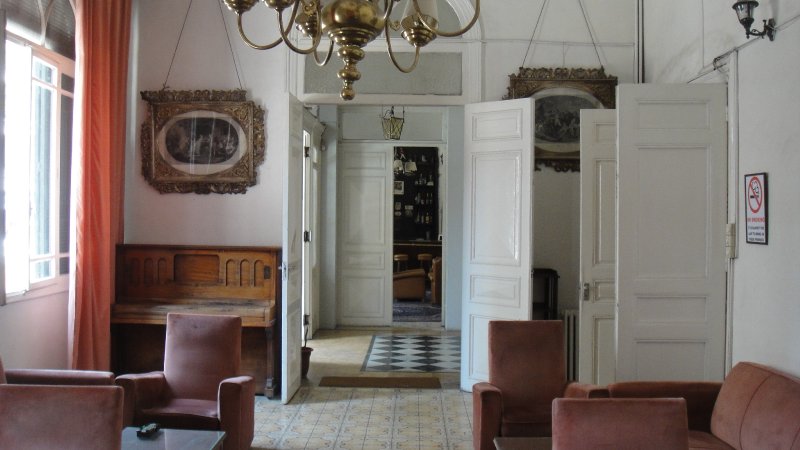 The lounge and bar at Hotel Baron 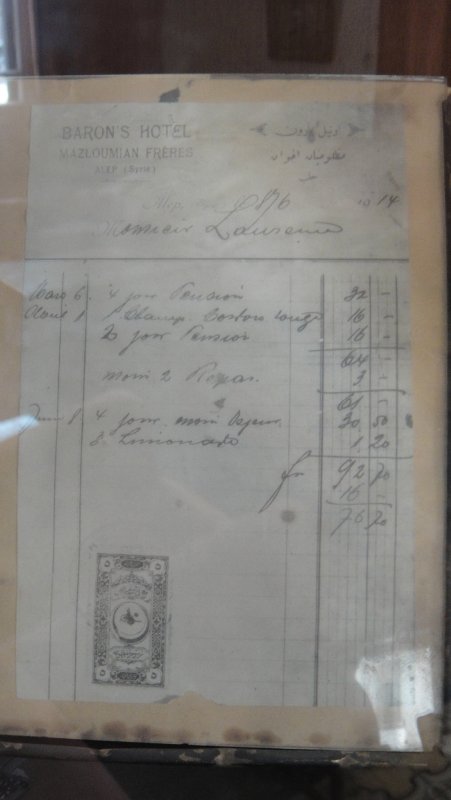 T.E. Lawrence's signed bill dated the 8th of June, 1914 is framed and displayed in the lounge - apparently the cheeky fellow never payed it 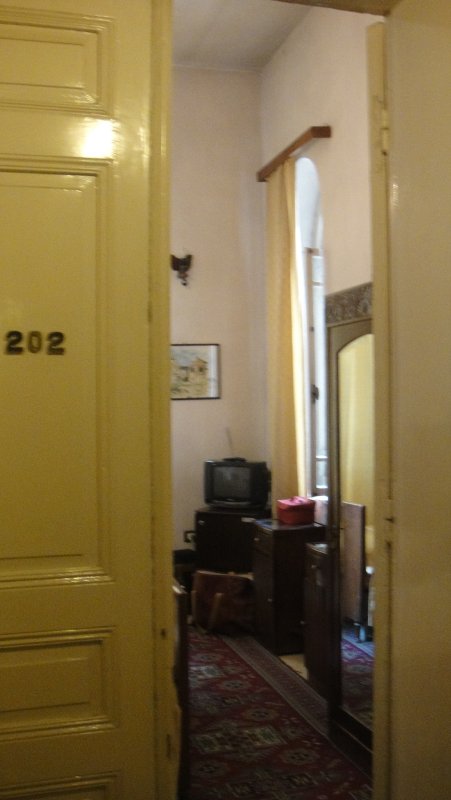 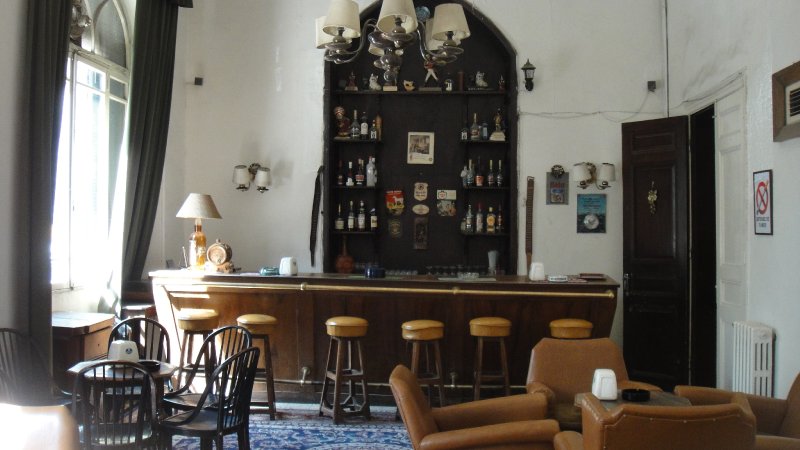 The bar at Hotel Baron 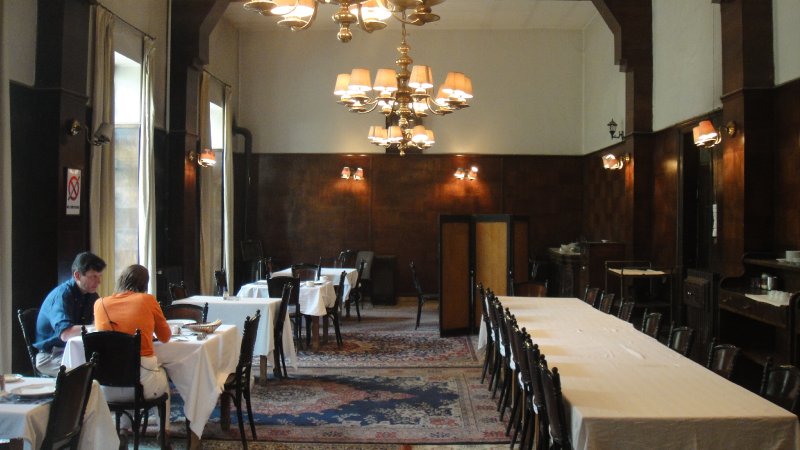 The banquet hall at Hotel Baron where I had breakfast 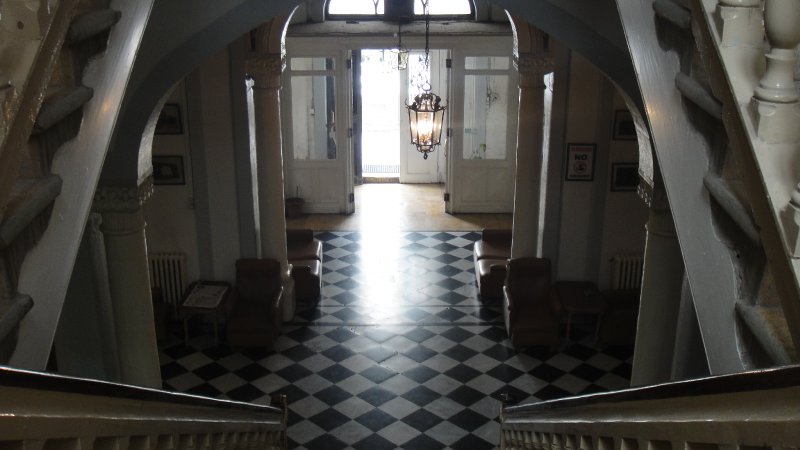 The main staircase at Hotel Baron 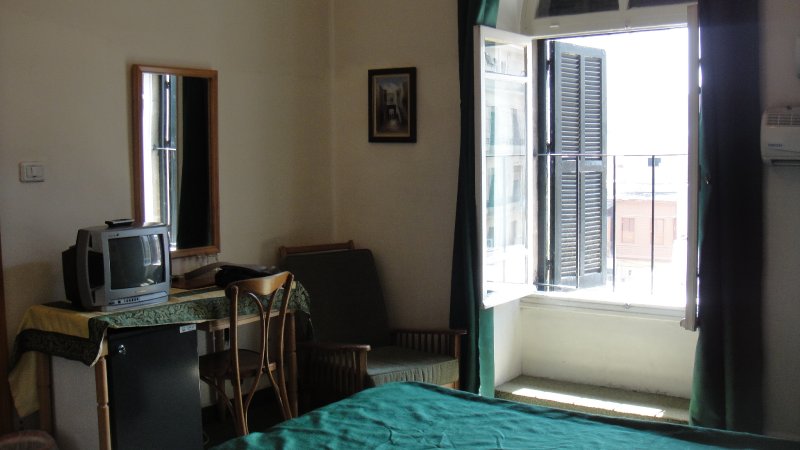 The hotel was overpriced and the manager tried to sell me tours every chance he got, but it exuded a grandeur (albeit faded) which other more modern and expensive hotels just couldn't match, so I was happy.

Anyway, believe it or not, I did actually leave the hotel to explore some of Aleppo's attractions, including the citadel and what turned out to be my favourite souq so far. Once again I wasn't in the market for spices or souvenirs but it was still nice to walk through souq Bab-Antakya on my way to the citadel. It was yet another souq which was filled with more locals than tourists so the hassle factor from the store people was virtually non-existent... except for the t-shirt store guy. It doesn't take a rocket surgeon to figure out that a stranger who addresses you as "My friend!" should be treated with complete suspicion; yet touts and merchants everywhere I've been to insist on using it in an attempt to gain your trust (Egypt and India were the worst for this). I guess it must work on the more gullible and easily flattered tourists otherwise they wouldn't still use it. 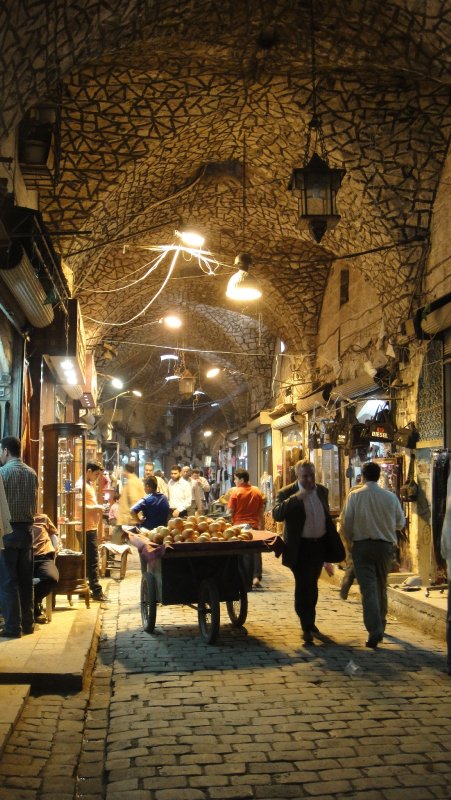 My favourite souq so far in my travels, the labyrinthine Souq Bab-Antakya in Aleppo

The best parts of the citadel were undoubtedly the outer wall, the bridge leading to the main gate and the impressive throne room. The inner area consisted mostly of crumbling ruins and a couple of mosques which would have otherwise been interesting to visit but were instead a little disappointing due to the false promise suggested by the outer shell. 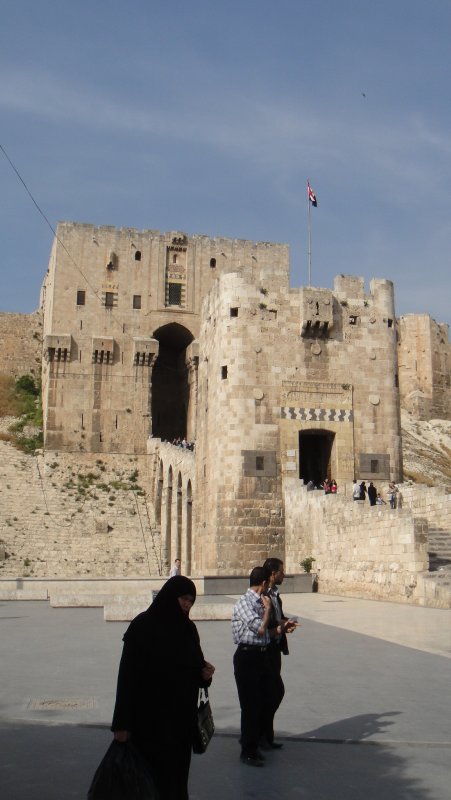 Bridge and main gate to the citadel in Aleppo 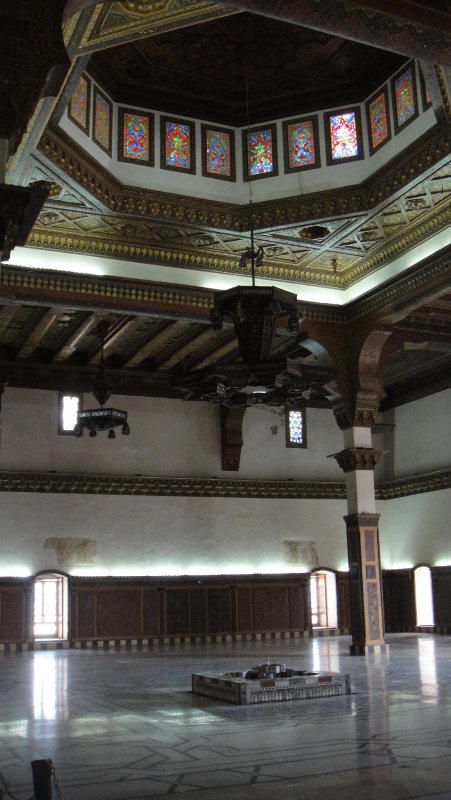 The impressive throne room at the citadel 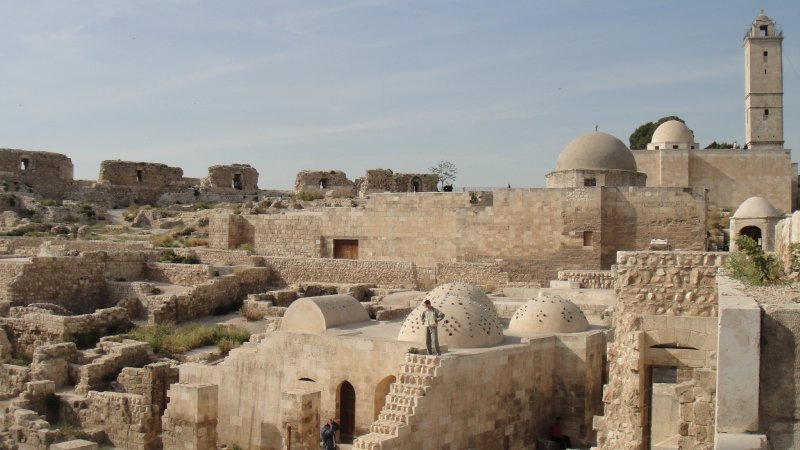 Some of the ruins and a large mosque inside the citadel 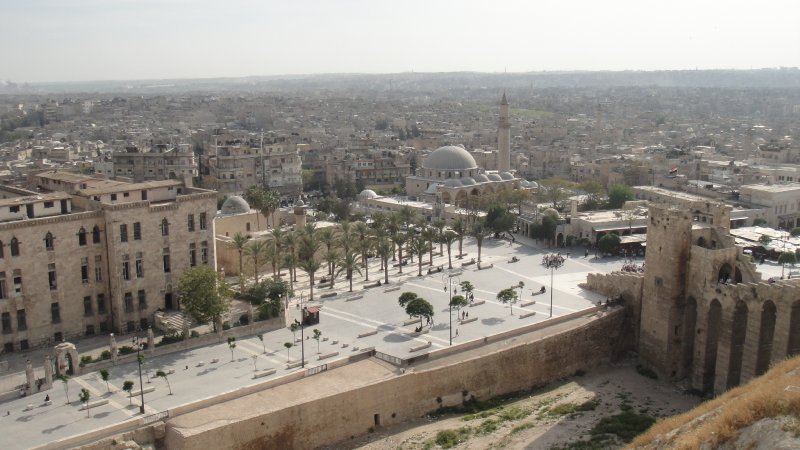 View of Aleppo from the walls of the citadel

There were several undergound rooms and chambers that you could walk around in, some of them attempting to show life "as it was" with the use of the ubiquitous posing mannequins. 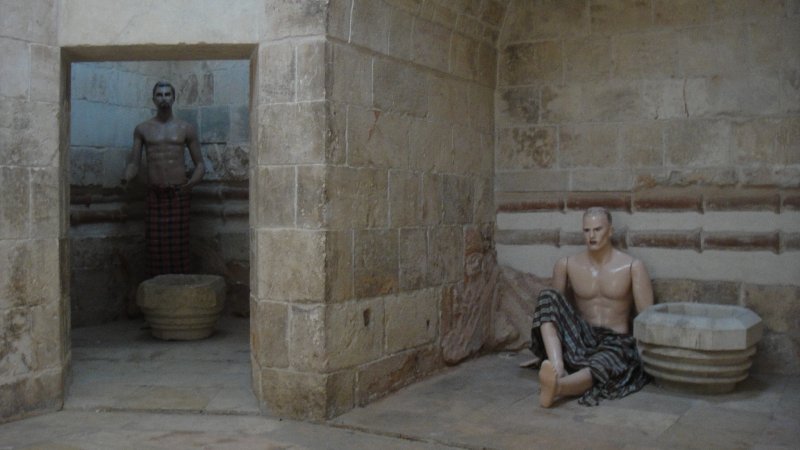 Just as I was about to leave the citadel, I met a two young Syrian students keen to practice their English. I learnt they were from small towns not far from Aleppo and were studying English in the city in hope of becoming English teachers. They turned out to be decent guys who weren't afraid to talk about religion and politics (I let them do most of the talking on these topics) though they were also smart enough not to approach these subjects in a preachy manner. We ended up having a friendly conversation right up until the the citadel closed. These guys once again highlighted how friendly the Syrian people really are. 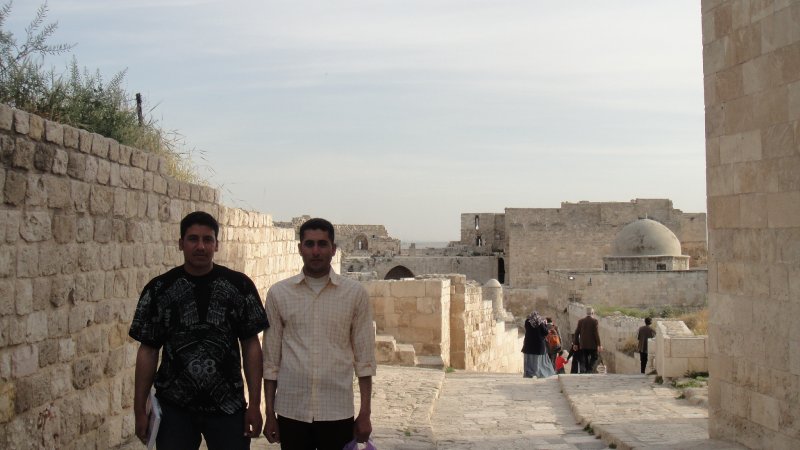 The two students, Edrees and Ahmed, whom I met at the citadel (trust me, they didn't mind having their photo taken. I noticed many Syrians don't smile in photos, even when they're posing for their own tourist snaps)

The rest of my time in Aleppo I spent walking around the city, catching up on my blogs (yes, once upon a time I did put some time aside for these things) and trying to organise my trip north across the border into Turkey. 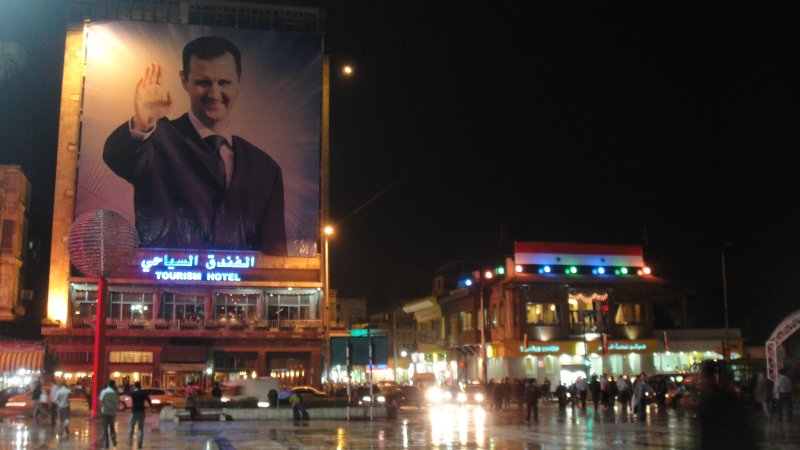 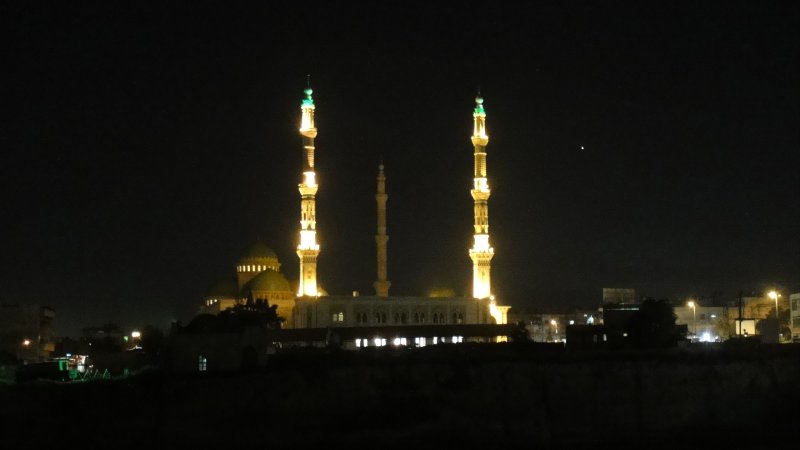 Alas, I had covered yet another country, this time at a blistening pace (just short of two weeks) and I was ready to move on to yet another country I'd been looking forward to since I started my journey in November. Unfortunately I'd have to learn the basics of yet another language just when my Arabic "hello", "please" and "thank you" were starting to sound intelligible.

So for the last time (in Arabic), Ma-as Salama!

Previous Next Table of contents

Sounds like another awesome country. It's amazing all the interesting people you meet (Priceless photo of the two students NOT smiling :-D)