24 °C
View Around the world on joshuag's travel map.

As I eluded to in my last post, I departed Olympos with two Aussies, Scottie and Charlotte, on our way to Ölüdeniz near Fethiye. Our main reason for heading there was because it was a good base to visit the nearby Saklıkent Gorge (or Canyon).

Our first night in Ölüdeniz was very quiet and involved a couple of beers, a game or two of table tennis and our discovery of the most delicious chicken kebabs in Turkey - actually I had got my Turkish words for "chicken" ("tavuk") and "wrap" ("durum") mixed up so, in each of the three occasions we ate there, I confidently offered to order for all of us by saying, "Three chicken tavuk lütfen!". So in effect I was asking for "Three Chicken chickens please!"... The women at the fast food joint were so nice they held back from laughing at us.

Early the next morning we set off on our trip to the canyon 50 km to the east of Ölüdeniz. The canyon is 18 kms long and in parts is 300 meters deep. Only about 4 km of the canyon is accessible by foot and it can only be done during summer. The very beginning of the canyon is narrow and the water is too deep to walk through so the only way in is through a wooden walk way bolted to the side of the cliff. 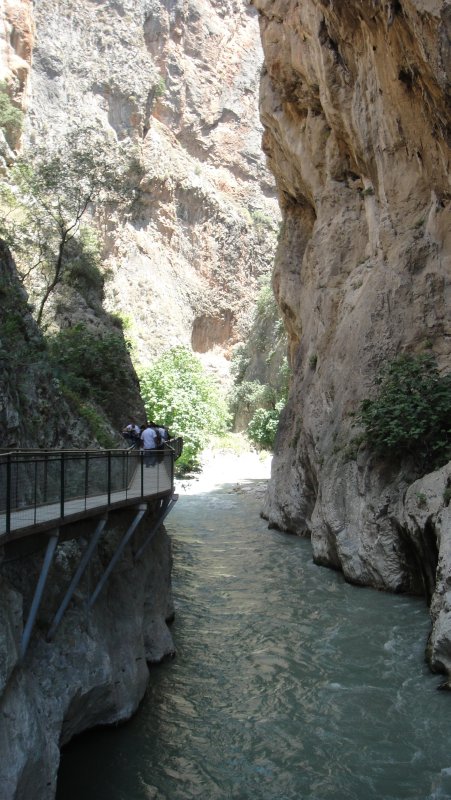 The path just past the entrance to Saklıkent Gorge

Once past the deep and narrow entrance, the gorge widened a little and we passed a small but violent waterfall that fed water to the last part of the canyon. After this waterfall there wasn't as much water flowing through the main canyon but the water became extremly murky, which is what made walking up the canyon a challenge. Most parts were knee deep but others were just above the waist level and there was no way to tell which parts were which (a walking stick would have been handy). 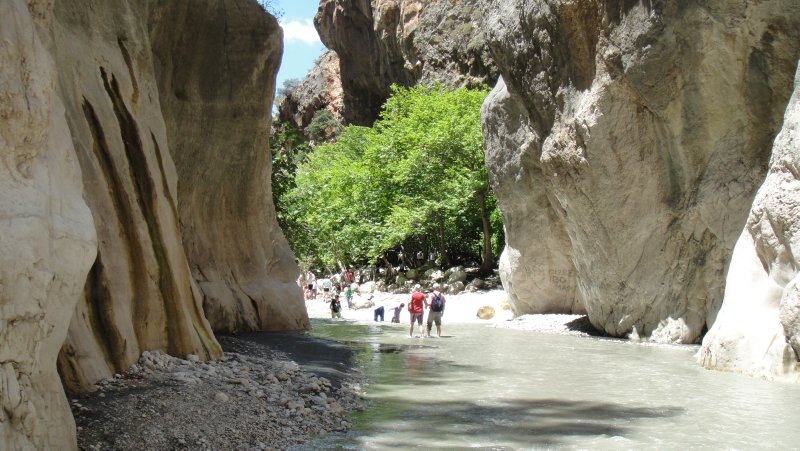 The shallow part at the beginning of Saklıkent Gorge 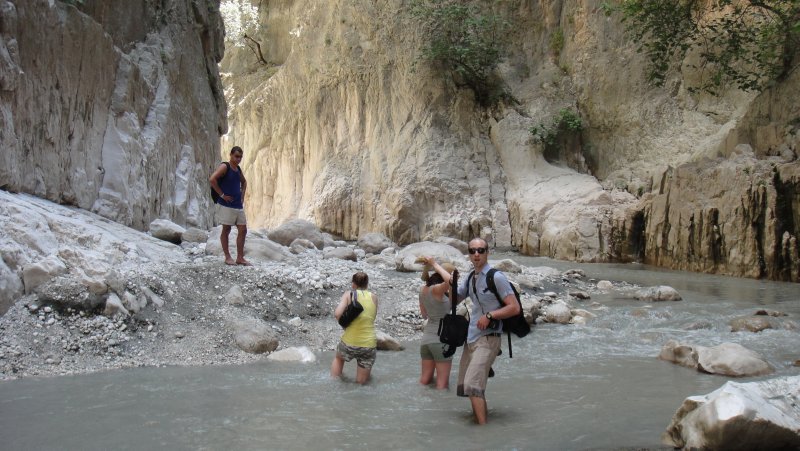 Two seconds after I took the above photo, the girl with the yellow top lost her sandal and it floated slowly away from all of us. She pleaded for someone to run after it and stop it but we were all just as far away from it as she was and we didn't know how deep it got so we stood there with the old "don't look at me" looks on our faces. Her boyfriend standing on the bank on the other side didn't seem to try too hard to go after it either. We didn't stick around long enough to see if it was rescued or not. The three of us were all wearing snug wet-socks that we hired to protect our feet so we weren't in danger of loosing ours. 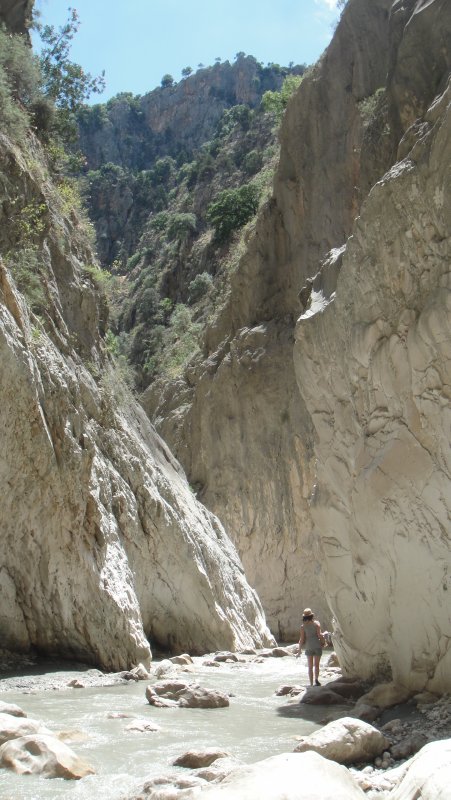 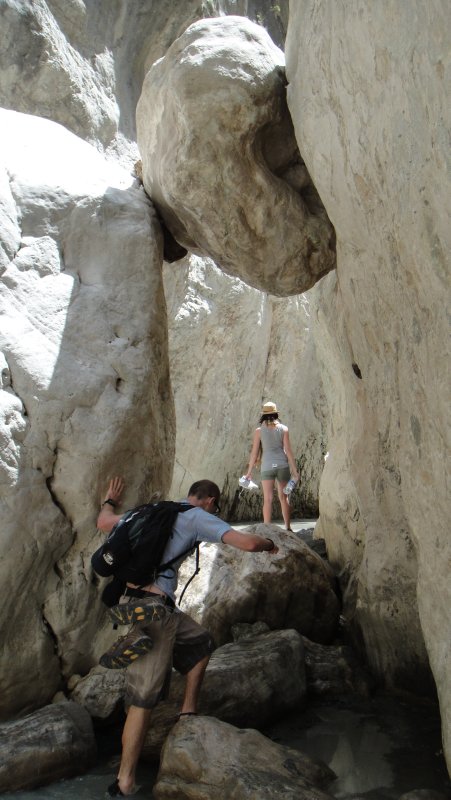 One of several precarious looking rocks in Saklıkent Gorge

We were never in much danger of being swept away as the canyon alternated between deep and shallow points every so often, but we were always in danger of getting our cameras wet if we accidentally stepped into a deep spot so it was quite slow going. Most of it was quite easy, but certain areas were quite tricky and they involved climbing over boulders or walking around the edges of the canyon hugging the cliff side where it wasn't so deep.

Eventually, after about 2-3 kms, we reached a waterfall and although we could have continued physically, going underneath it would have resulted in the end of our cameras as well as everything else we were carrying, so at this point we decided to turn back. 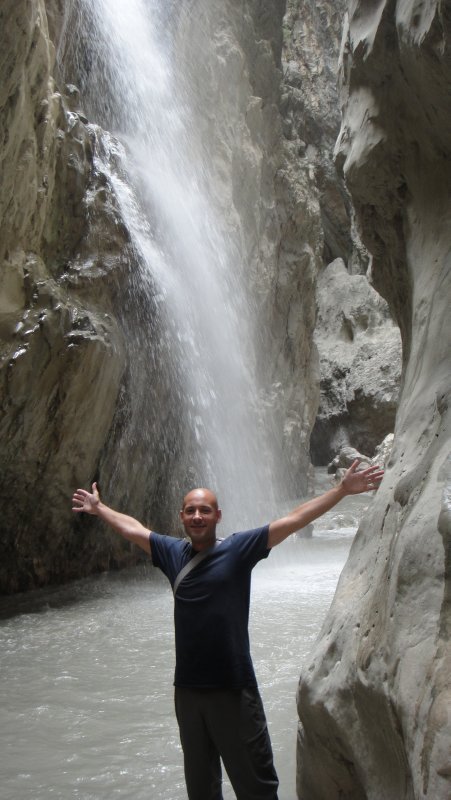 The waterfall at the end of our walk through Saklıkent Gorge 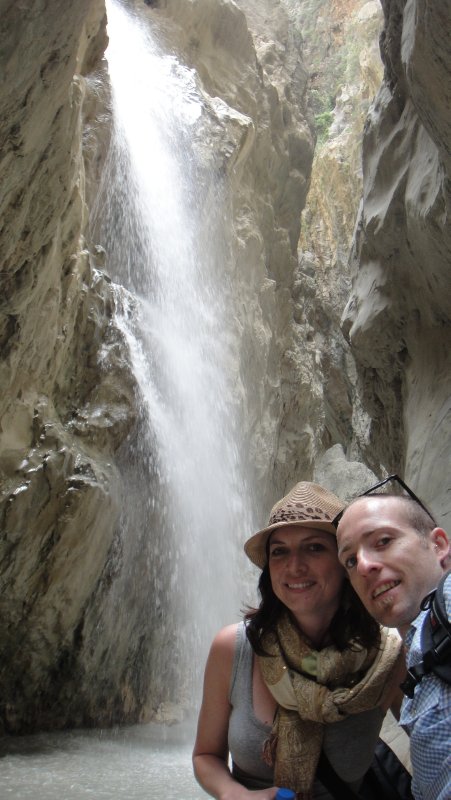 Charlotte and Scottie at the waterfall in Saklıkent Gorge

There were local guides walking up and down the canyon helping people navigate their way through tricky areas. Inevitably, one of them tried to guide us without us asking for his help. I was a bit reluctant to accept his help because at that point we were managing quite well and we knew ulitmately it would lead to demands for money. As it turned out, he did turn out to be quite helpful when we reached parts where it got deeper and the current became much stronger. He obviously knew the river bed like the back of his hand because he knew exactly where we needed to step and he didn't even hesitate as he strolled through the area like a cheetah. On our return he also took us over a large boulder which we had previously waded around on our own with the water lapping up to our chests. 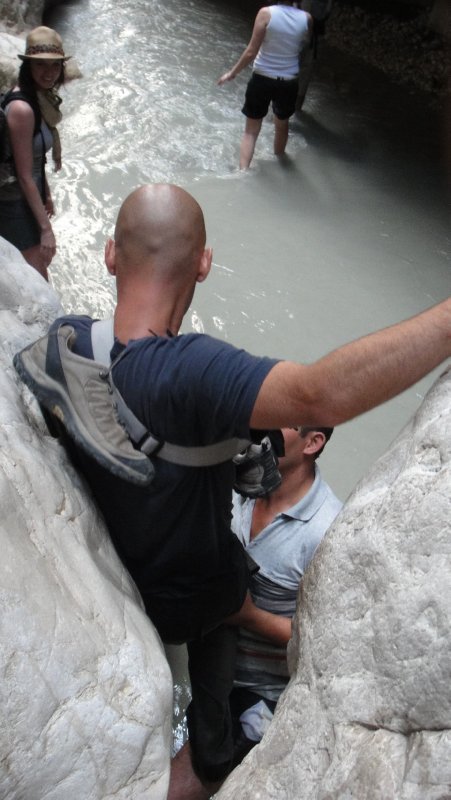 A few hours after we started, we were back at the entrance to the gorge with a bit of time to spare before the next public minibus departed for Ölüdeniz. Once back in Ölüdeniz, we indulged in another "Chicken chicken", before we embarked on a long walk down the valley to the beach so we could catch the sunset. 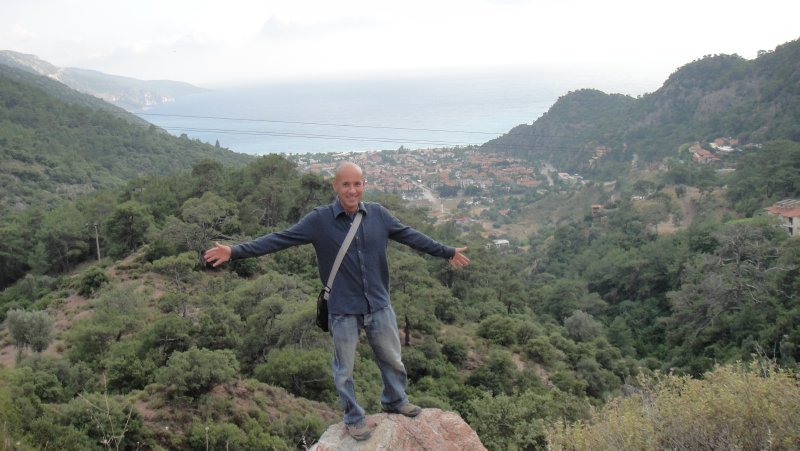 View of Ölüdeniz Beach from top of valley - I have to stop doing that pose, it's getting old now 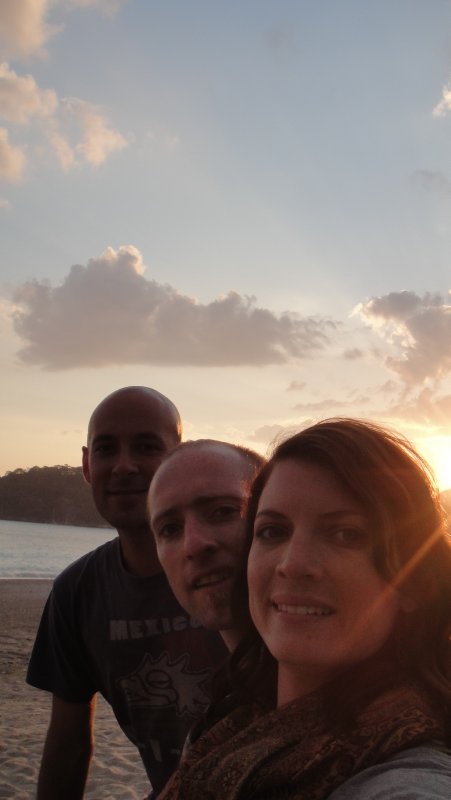 Me, Scottie and Charlotte at Ölüdeniz Beach

The actual town of Ölüdeniz wasn't much to write home about, in fact it didn't feel like we were in Turkey at all. The town is full of British tourists, lots of families and plenty of middle-aged men who paraded around proudly with no shirts on, their pasty white pot bellies hanging over their too-short shorts. Even the Union Jack was flying more prevalently than the Turkish flag throughout the town. All the stores, restaurants, bars and hotels had English signs and the restaurant menus were dominated by items like steak, chips and mushy peas - I guess the locals are willing to put up with this pseudo-invasion in exchange for those precious tourist dollars (or should I say pounds). 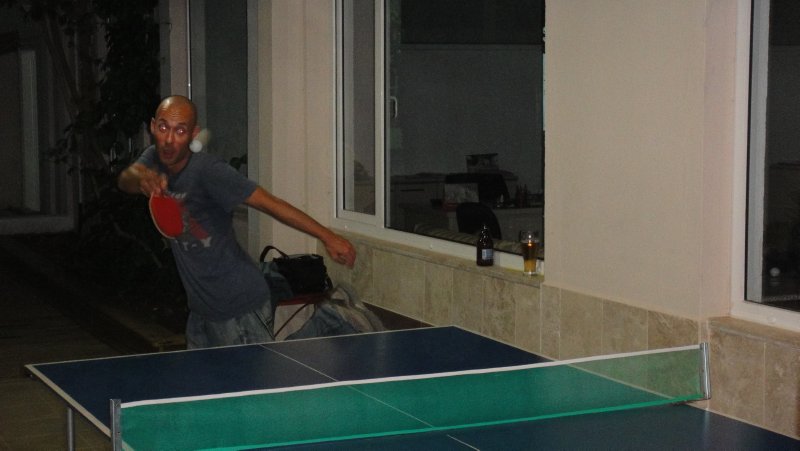 Early the next day Scottie and Charlotte sadly returned to London (where they are working) and I jumped on a bus to Selçuk in the Izmir province on the west coast of Turkey.

Even though Selçuk has its fair share of tourists, it doesn't feel like they've overrun the place. The cafes were full of locals (mainly men) playing backgammon and oKey (a traditional Turkish board game) and most of the people out walking around appeared to be Turkish. This was surprising considering that this is the town at the door step to what once was the second largest city in the Roman empire (after Rome). 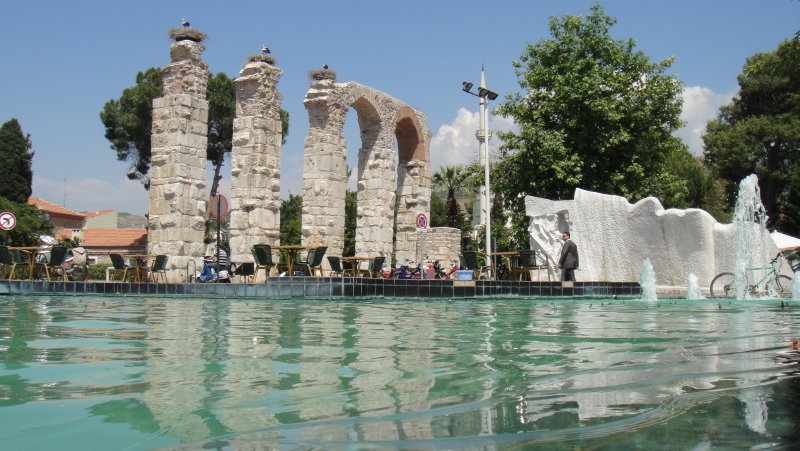 The day I chose to visit Ephesus (also known as Efes) was almost unbareably hot and the crowds were out in droves, but it was still well worth it. The amazing columned facade at the Library of Celsus was easily the most impressive structure. The Great Theatre would have been just as amazing had part of it not been obstructed by the ubiquitous cranes, fences and scaffolding I keep on coming across during my trip. I tell you, with all the scaffolding I've seen ruining the vistas of major tourist attractions, I predict that it should be an excellent time to go backpacking in around 2012. 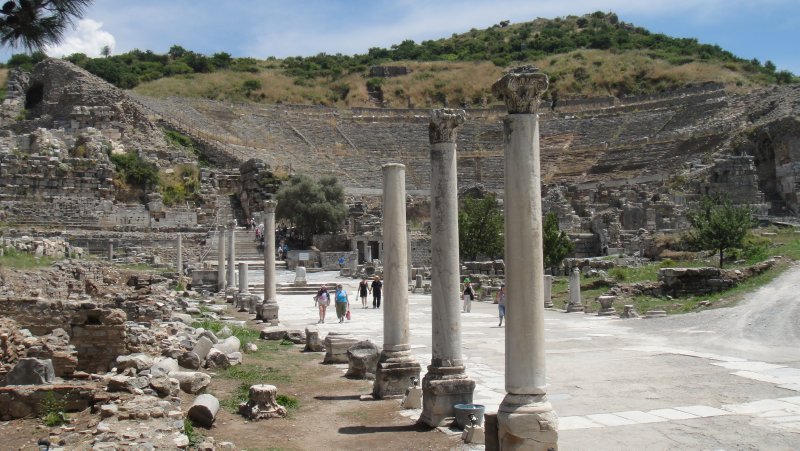 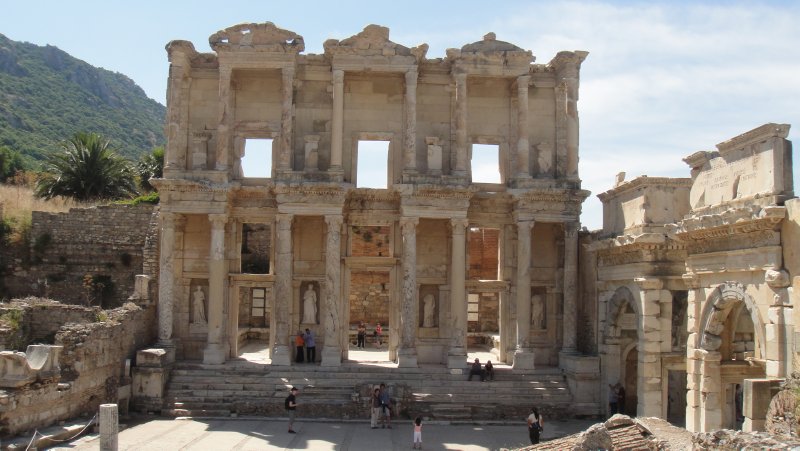 The amazing Library of Celsus in Ephesus 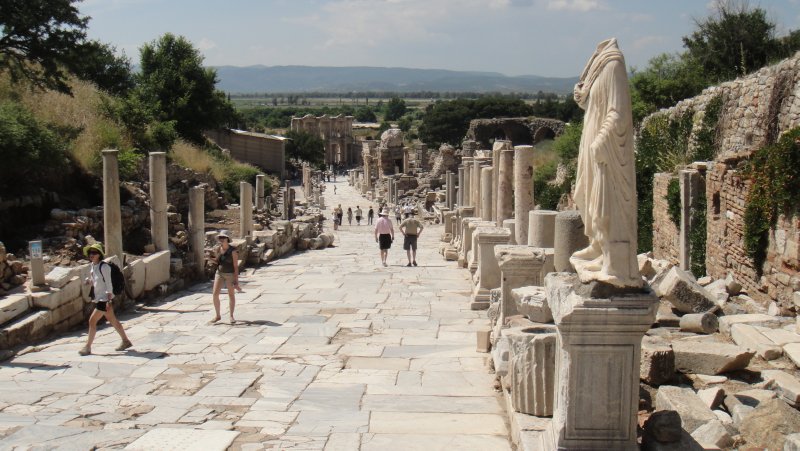 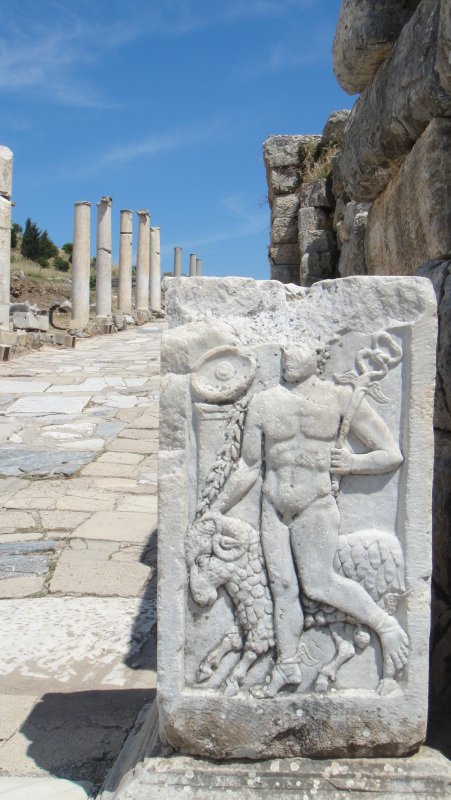 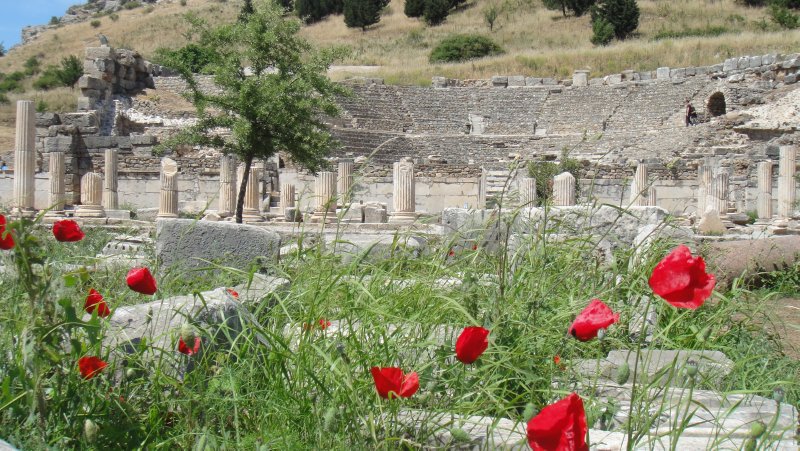 After Ephesus, I visited the Monument of St. John which was on top of a small hill near the site of one of the seven wonders of the ancient world, namely, the Temple of Artemis, built circa 550 BC. In fact from the walls around the monument of St. John, you could get a decent view of the remnants of this ancient wonder. Unfortunately, little more than a single column is still standing... I guess that's better than nothing. 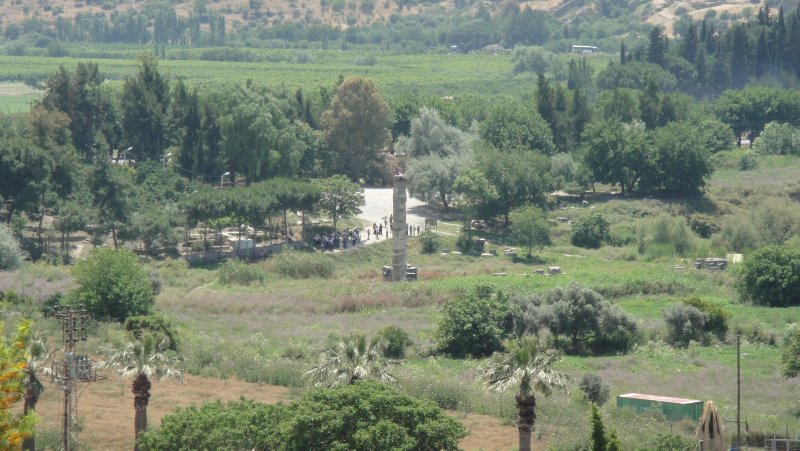 If you look hard enough in the center of the photo, you can see the last remaining column of Temple of Artemis (one of original Seven Wonders of the Ancient World) - view from Monument of St. John, Selçuk

The Monument of St. John is supposed to be where St. John, Jesus's favourite disciple (or one could say, his main hommie), came on a holiday sometime between 37 and 48 AD (or it was a pilgrimage, it's something like that anyway). It's also the place where he was supposedly buried and also legend has it that when he came here, he was acompanied by the "Virgin" Mary. 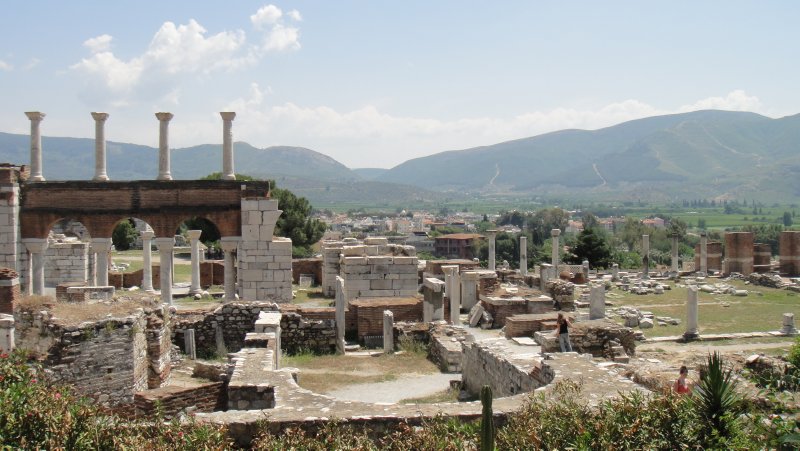 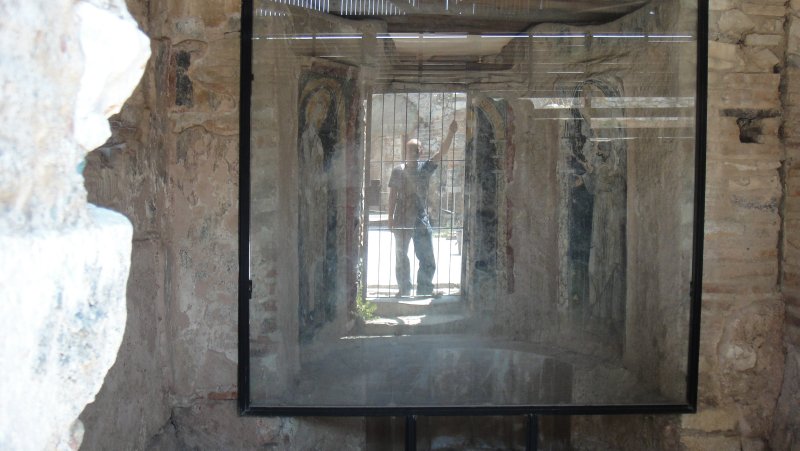 My reflection (I'm such a poser) in glass barrier of tomb in Monument of St. John, Selçuk 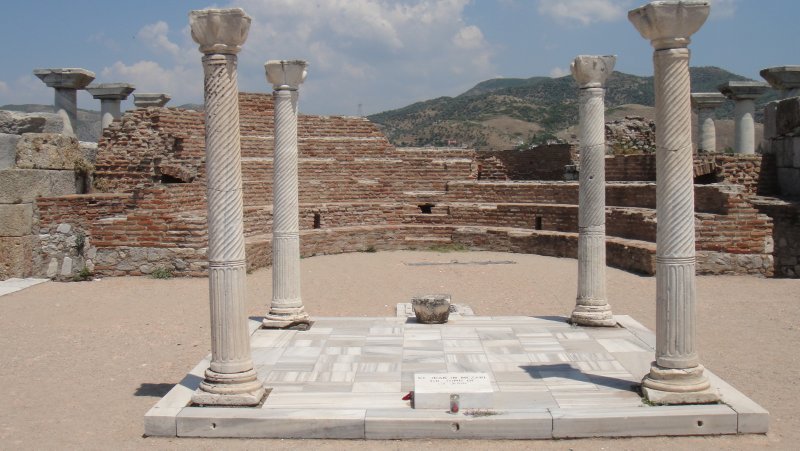 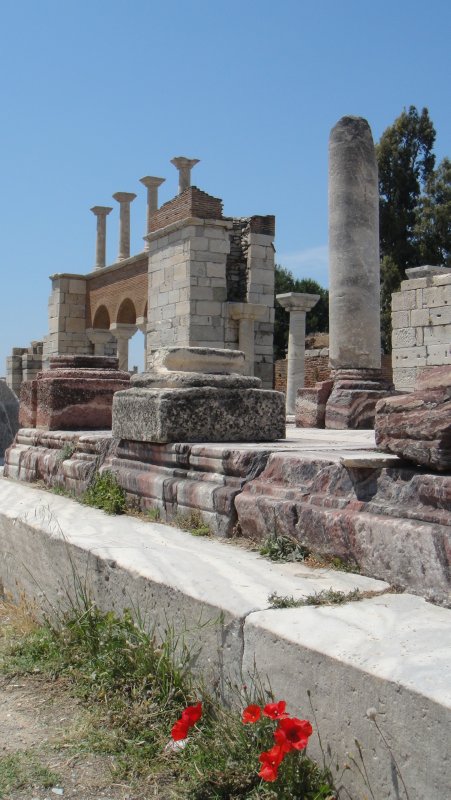 I was leaving Selçuk the next day on a sleeper bus so I had the entire day to continue exploring, but after all the walking I'd been doing on the previous few days, I could only muster the strength to go to visit the Ephesus museum followed by a trip to a shady park were I lay on the grass, relaxing, watching life go by (right next to a big dried dog turd which I didn't notice until I got up and stepped on it). 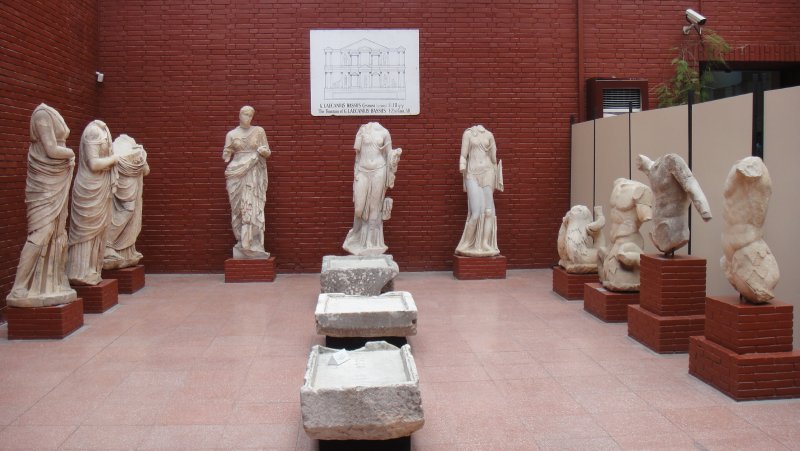 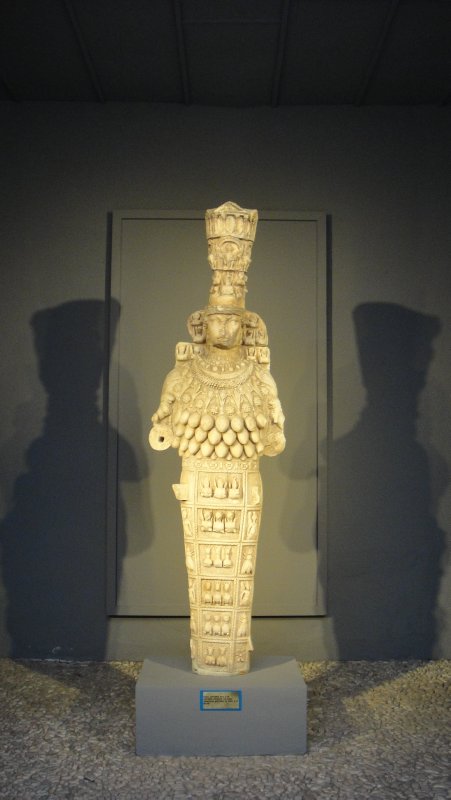 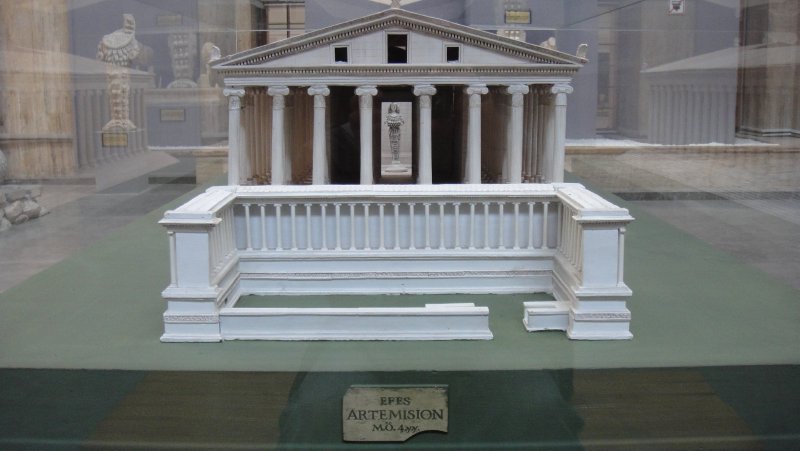 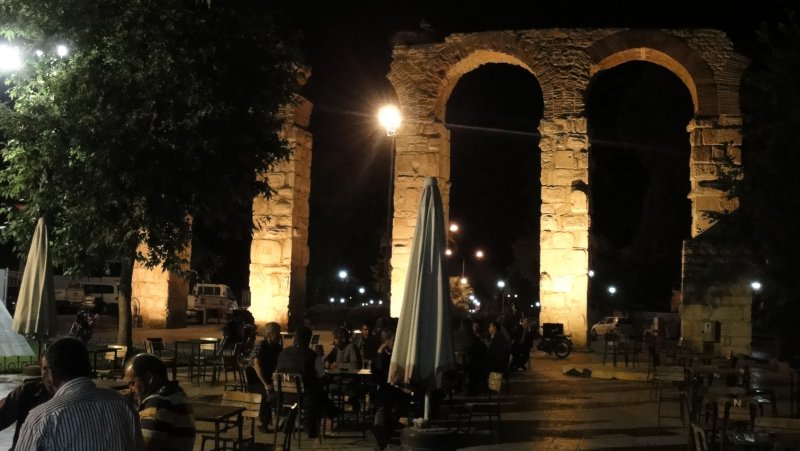 While I was travelling around Turkey I had noticed that in most otogars (bus stations) there were what seemed like feverish celebrations with music and dancing. I found out later that they were all send-offs to all the new military recruits (it is compulsory for every male from 18 to 41 to serve up to 15 months in the military). There must have been a whole bunch from Selçuk being conscripted because the day I left it was mayhem at the otogar with lots of Turkish flags, drums, trumpets and singing. 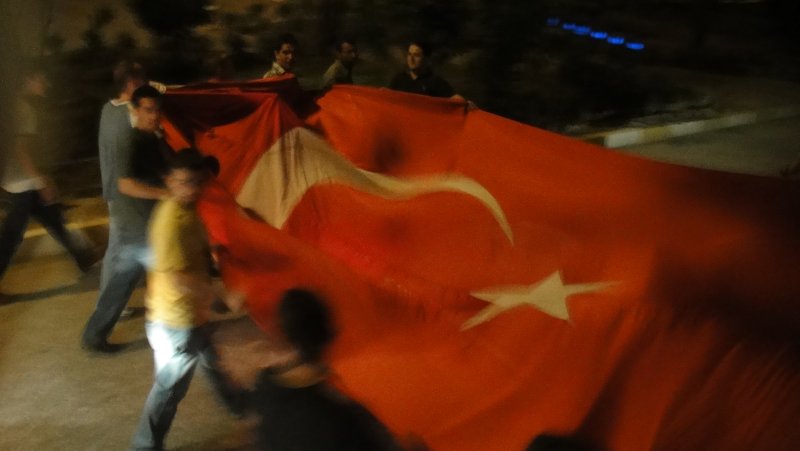 Farewell celebrations to some young military recruits at Selçuk otogar

And so, I myself said farewell to Selçuk also. My next stop would become one of my favourite cities in this little journey of mine.

Previous Next Table of contents