28 °C
View Around the world on joshuag's travel map.

Ayşegül and I arrived in Çanakkale (pronounced: Cha-na-ka-leh) after a six hour bus trip from Istanbul ending with a short ferry ride from Eceabat on the Gallipoli Penisula. Çanakkale is a nice little city with a picturesque waterfront and lively atmosphere. It's also probably the best launching pad for day trips to Gallipoli as there really isn't much choice in terms of accomodation on the Gallipoli Peninsula side. 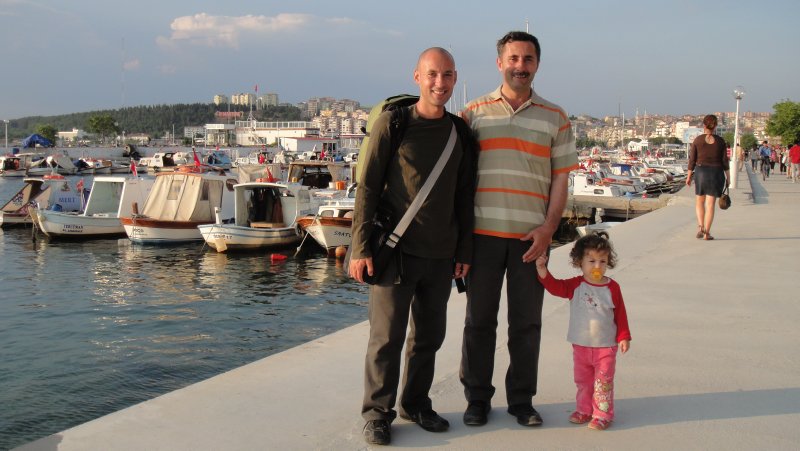 Just after we arrived in Çanakkale, this nice man asked if we could get a picture of us together on my camera, just so he could show his daughter the preview

Anyone who is not familiar with the Gallipoli campaign of WWI, it remains the most significant military campaign for both Australians and New Zealanders. Each year on the 25th of April, both countries commemorate ANZAC (Australian and New Zealand Army Corps) day. It was on this day in 1915 when the allied forces landed on the beaches of the Gallipoli Peninsula as part of a joint British and French operation to capture the Ottoman capital of Istanbul. The campaign was unsuccessful and boths sides suffered heavy losses. The struggle to defend it sowed the seeds for the Turkish War of Independence which led to the formation of the Turkish Republic under Mustafa Kemal Atatürk who was himself a Turkish commander at Gallipoli.

I had been in Turkey on ANZAC day (25th of April), but I was at the other end of the country having just crossed the border from Syria, this combined with the fact you usually need to book accomodation well in advance, I decided to skip trying to get to Gallipoli on ANZAC day itself and instead visit when I could find a place to stay and when it wasn't so crowded with visitors. Actually, having spoken to an Australian girl in Olympos who had been to Gallipoli on ANZAC day, I was very glad I hadn't been there at the time. She told me about gangs of drunken Aussies roaming the streets of Çanakkale making fools of themselves and annoying the locals. She said they were definitely the minority, but the way they acted was undoubtedly tainting the image of Australia and New Zealand in the area. 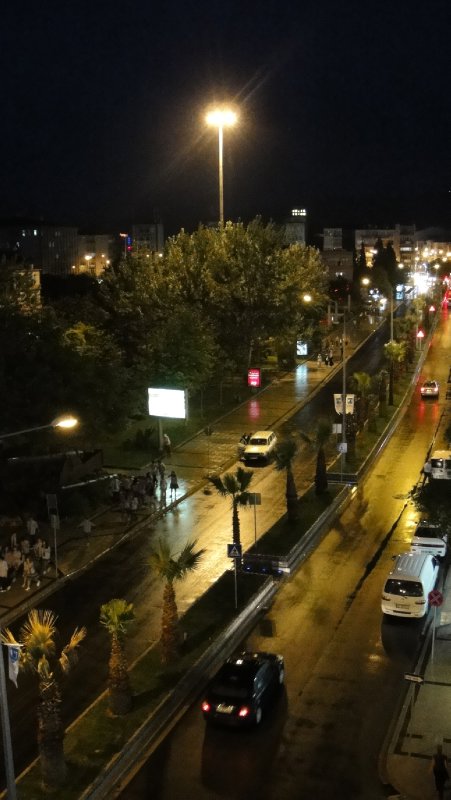 The main avenue in Çanakkale after some light rain

We got up pretty early and set off on the short ferry back to Eceabat on the Gallipoli Peninsula. From Eceabat we then took a local bus to the Kabatepe Information Centre where there was also a tiny museum. Ayşegül had already visited Gallipoli, including the museum, so I popped in for a quick look around on my own. The one-room museum housed several display cases containing items such as photos, letters and uniforms from both the Allied and Turkish forces dating back to the March 1915 landings during WWI. 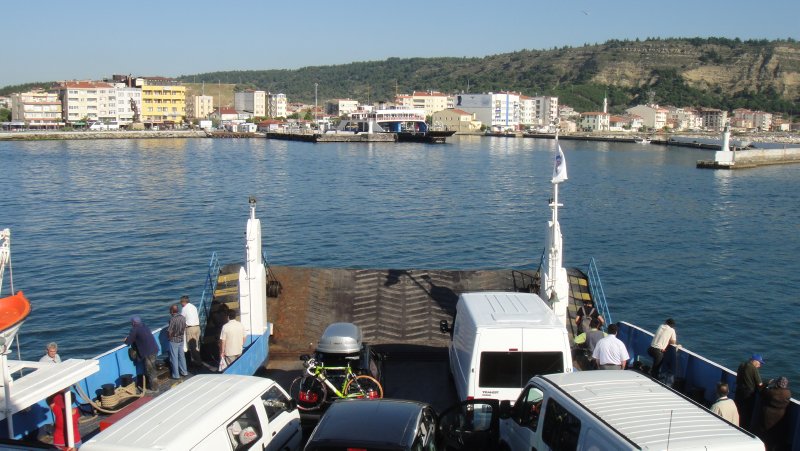 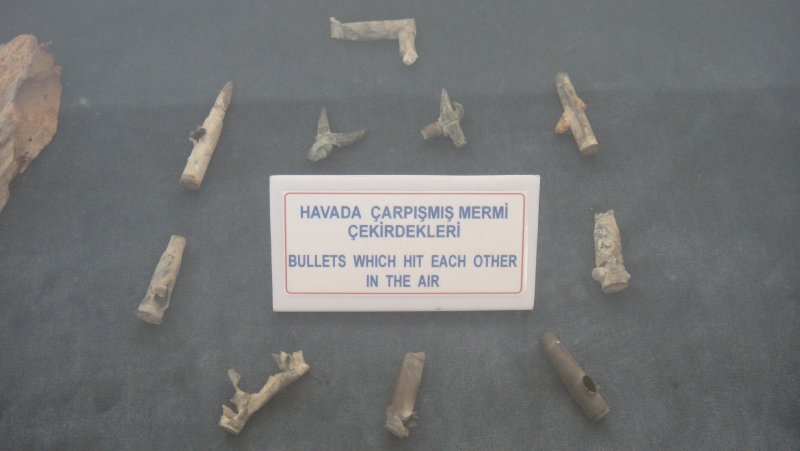 Bullets which hit each other in the air, Kabatepe Museum, Gallipoli Peninsula - gives you an idea of how many bullets were flying around

From the museum we travelled by foot for a few kilometers up the coast until we reached the ANZAC Commemorative Site. The sun was shining and each of the spots we stopped by were virtually empty. Being there, I could imagine what it would be like during ANZAC day with all the large crowds and tour buses driving around so I was really glad to be there on that beautiful day with no one around - I think it was a really nice way to visit Gallipoli. 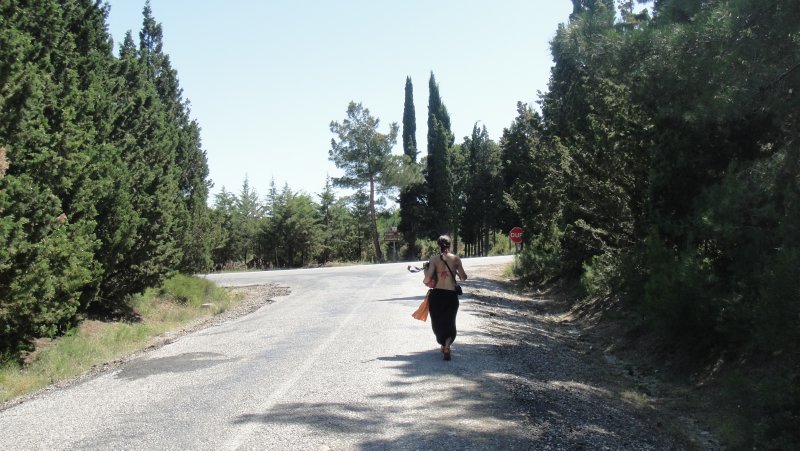 Walking down a road on the Gallipoli Peninsula

Our walk brought us to several cemetaries along the coast and in each one it was quite easy to spot the NZ soldier graves because someone had placed red poppy flowers against their bases. 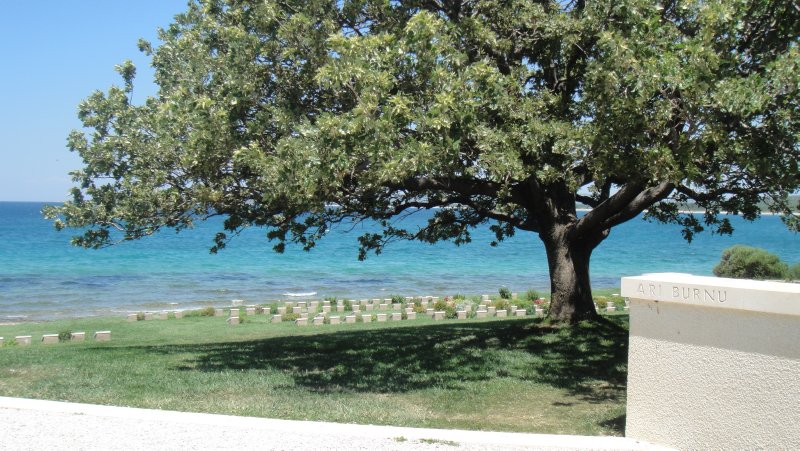 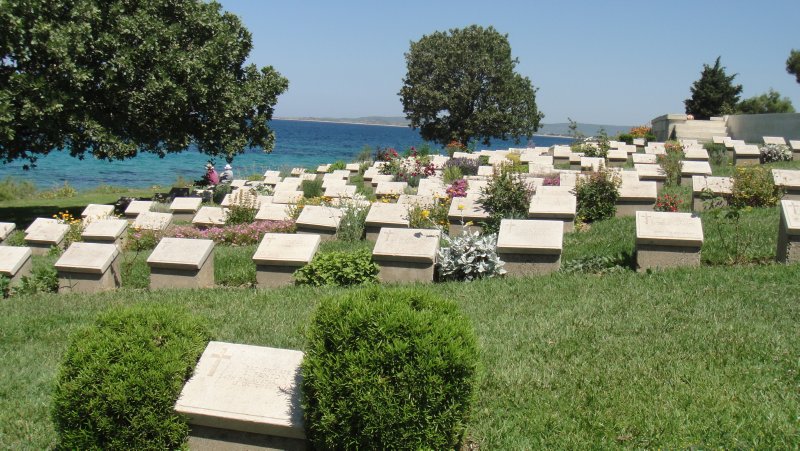 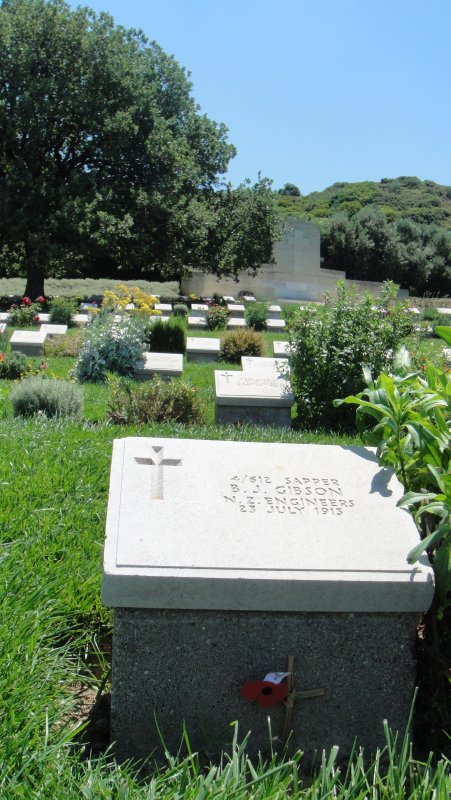 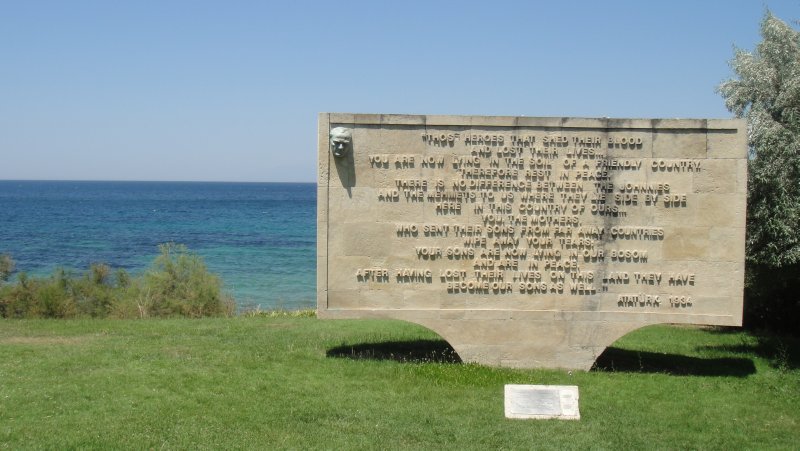 Nice quote by Mustafa Kemal Atatürk located near ANZAC Cove which Ayşegül pointed out to me, Gallipoli Peninsula

If you can't read the quote, it says:

"THOSE HEROES THAT SHED THEIR BLOOD
AND LOST THEIR LIVES...
YOU ARE NOW LIVING IN THE SOIL OF A FRIENDLY COUNTRY.
THEREFORE REST IN PEACE.
THERE IS NO DIFFERENCE BETWEEN THE JOHNNIES
AND THE MEHMETS TO US WHERE THEY LIE SIDE BY SIDE
HERE IN THIS COUNTRY OF OURS...
YOU, THE MOTHERS,
WHO SENT THEIR SONS FROM FAR AWAY COUNTRIES
WIPE AWAY YOUR TEARS;
YOUR SONS ARE NOW LIVING IN OUR BOSOM
AND ARE IN PEACE.
AFTER HAVING LOST THEIR LIVES ON THIS LAND THEY HAVE
BECOME OUR SONS AS WELL." 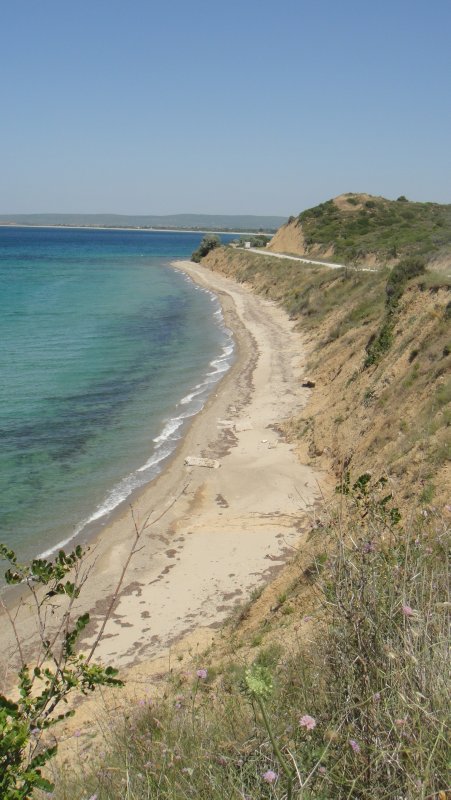 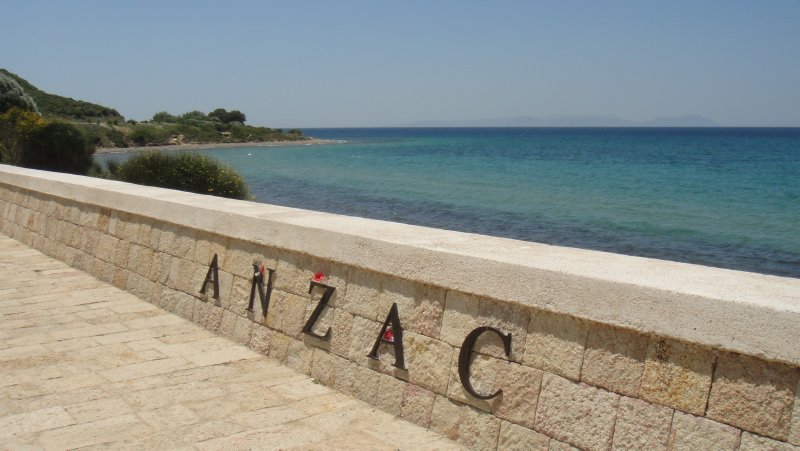 Unfortunately we didn't get close to visiting all the memorial sites around the Peninsula - not only is it a really big place, but hunger and tired limbs started to set in and we had taken most of the day to walk just a small part along the coast surrounding ANZAC cove.

On our return trip on the ferry we stood out on the corner of one of the decks to watch the scenery and almost immediately we were swarmed by a small group of school girls who'd been out on a school trip. Most of them were shy but a couple of them were a little more cheeky and it didn't take them long to identify me as a foreigner. Their English wasn't so good, so they mainly spoke with Ayşegül, asking her dozens of questions about us, giggling throughout, you know, like young school girls do. It wasn't long before their cameras came out resulting in an extended photo shoot. 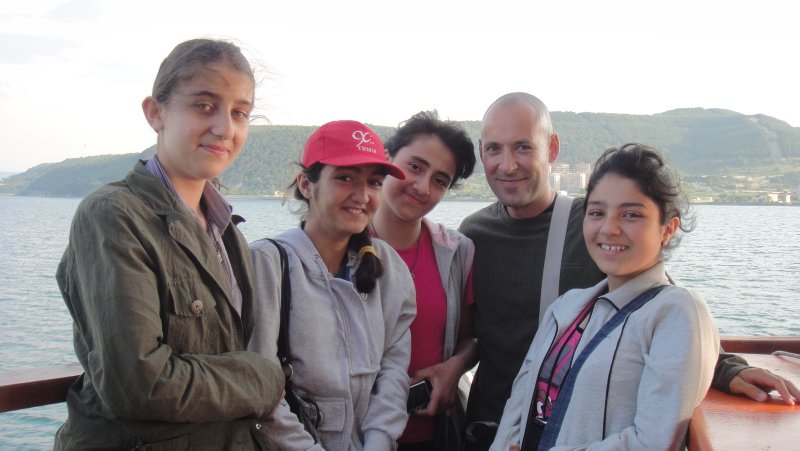 The Dardanelles Strait between the Gallipoli Peninsula and the Çanakkale side was most beautiful at sunset when the sun disappeared behind the hills of the Peninsula. 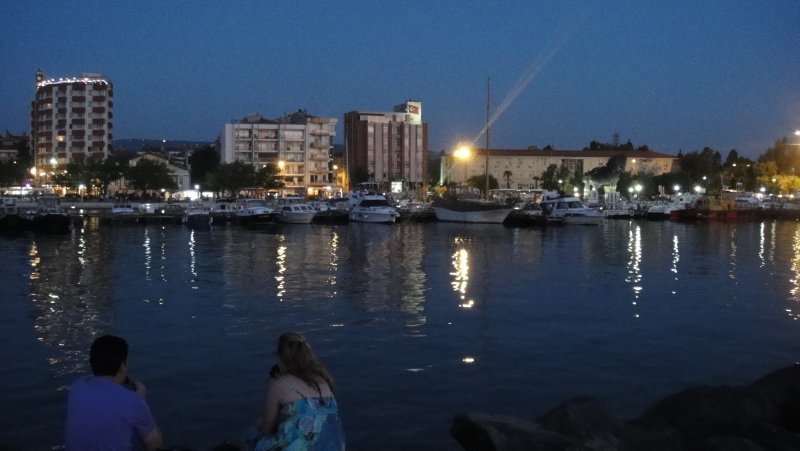 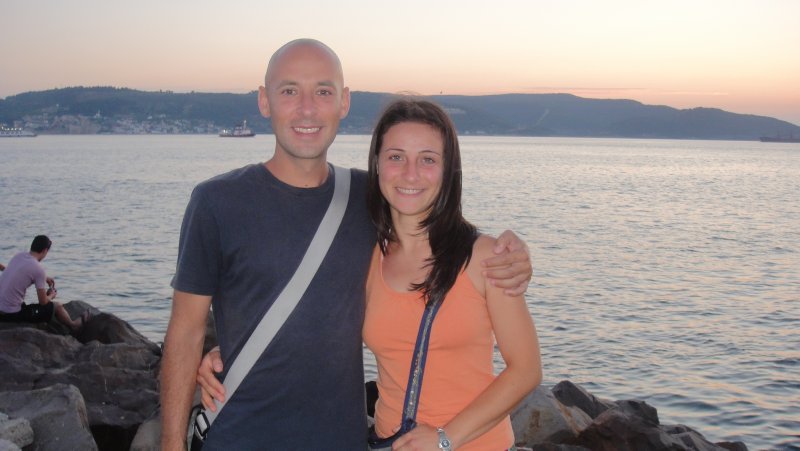 Me and Ayşegül at the waterfront in Çanakkale

Have I mentioned the food in Turkey is delicious? While we were in Çanakkale, Ayşegül introduced me to Tantuni (finely chopped snippets of beef are stir-fried with water, oil, onions, tomatoes and herbs, then stuffed into a half loaf of bread) and Şalgam (a delicious spicy juice made from black carrot pickles, salted, spiced, and flavoured with aromatic fermented turnips) - my mouth is watering as I write this just thinking about it. For me, Turkish food has raced up in to my top three favourite types of food, right next to Indian and Mexican. 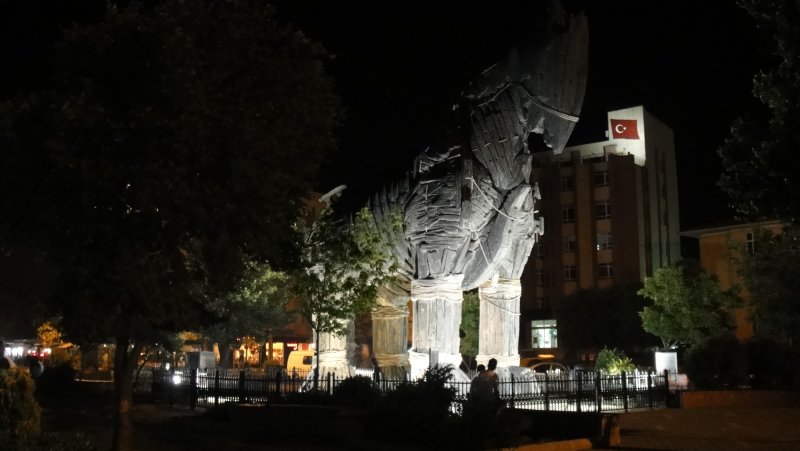 Another spot to visit in Çanakkale was the Naval Museum. It consisted mostly of old WWI cannons, sea mines, the shell of an old submarine and a replica of the minelayer Nusrat. 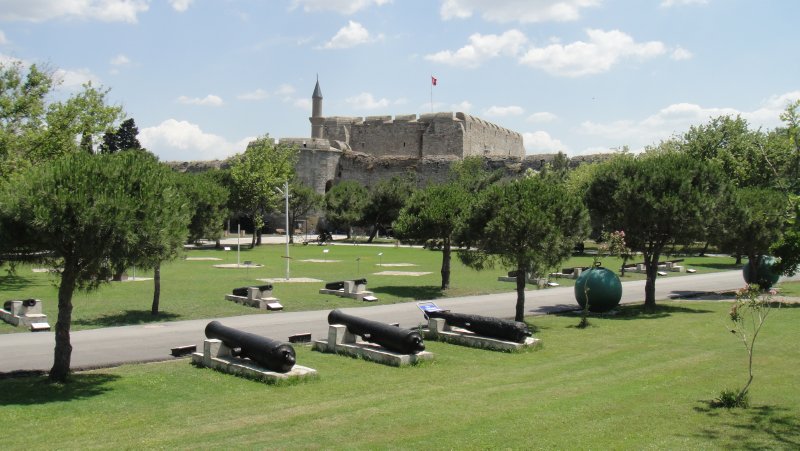 Fort Çimenlik in background at the Naval Museum, Çanakkale 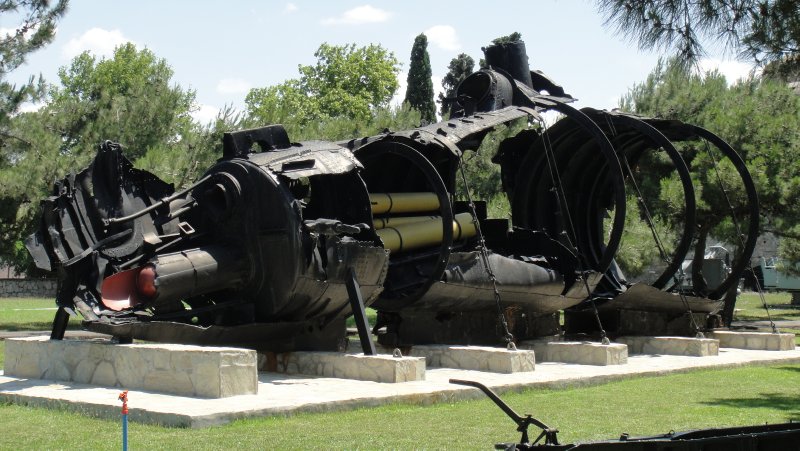 It was also in Çanakkale where I was when the Football World Cup started (that's how far behind my blog is!) - I remember my disappointment with Mexico as they could barely manage a 1 - 1 draw against South Africa, on the other hand, I was quite happy the cup hosts didn't loose. Luckily Ayşegül was suffering from Cup fever just as much as I was so I didn't have to go and watch the matches all by myself.

After Çanakkale we made a brief stop in the small beachside town of Ören, a little farther south the coast. It was like a resort town, but more for Turkish people rather than foreign tourists. It was the first, and probably last, time I stayed in a resort-like hotel. It wasn't a particularly flash resort - you could tell it had been around for years due to the 70's retro style decor. The high season was ending so the pool was surrounded by empty sun recliners and the bar next to the pool was almost always deserted. The other guests at the hostel were mostly families with young children. Ören was all about relaxing in the sun and it was just what I needed. 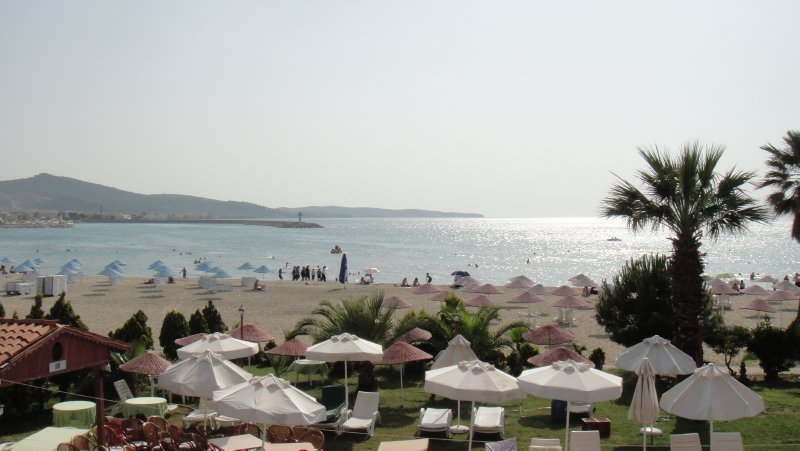 We only went swimming at the beach once because during the day the seas were quite rough and even though the waves were small the sea was quite murky and turbulent. 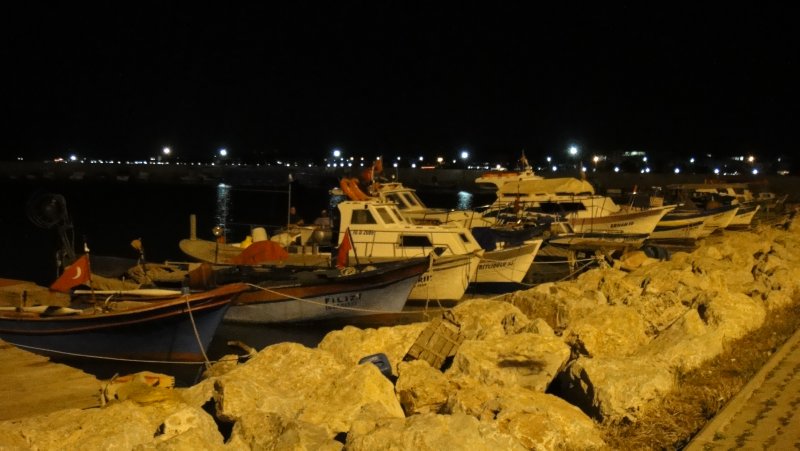 After Ören it was a quick bus ride to Ayvalik which was a good place to catch a ferry to my next destination, Greece. Like Ören, Ayvalik was also a small town, but slightly bigger and with a livelier waterfront. The main seafront was lined with day-trip cruise ships and small cafes. We found a nice little bar called the White Night Cafe right near the water with a big screen tv where we could watch the football world cup. We must have watched about a dozen games in that bar whilst drinking countless cheap beers (cheap in price, not quality). 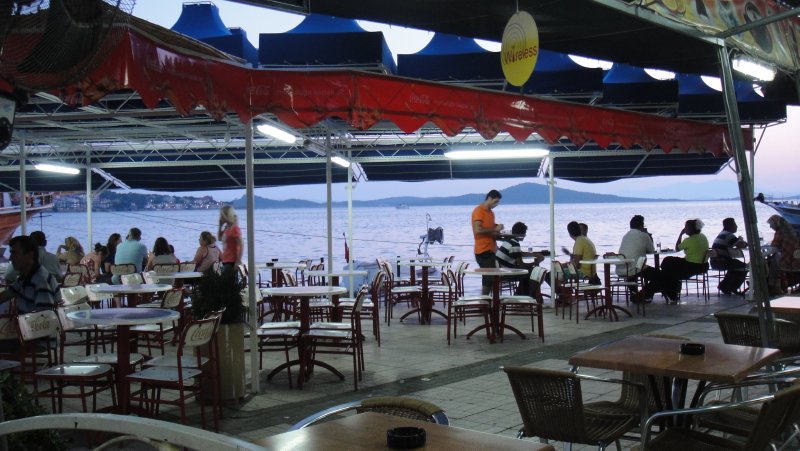 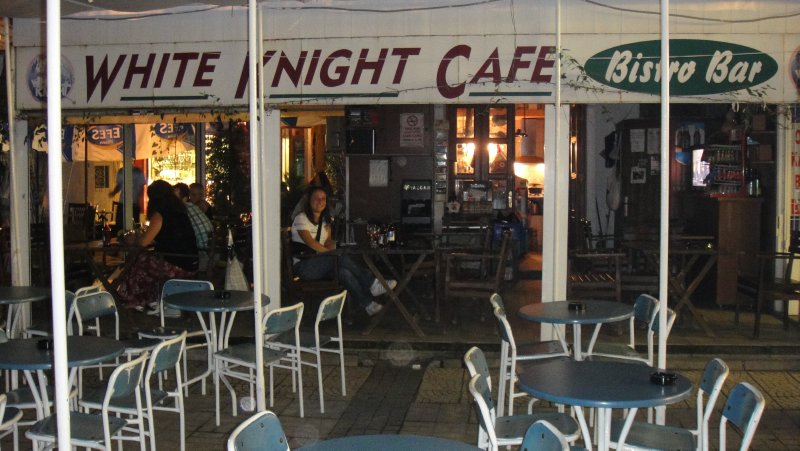 As quaint and beautiful as Ayvalik was, it didn't have many prominent historical sight-seeing locations. The most obvious was a 19th-century church of Ayios Ioannis which was converted into a mosque and is now known as Saatlı Camii (Mosque with a Clock). This church-turned-mosque is quite rare because when churches were converted into mosques, structures like bell or clock towers were usually demolished or replaced by minarets. 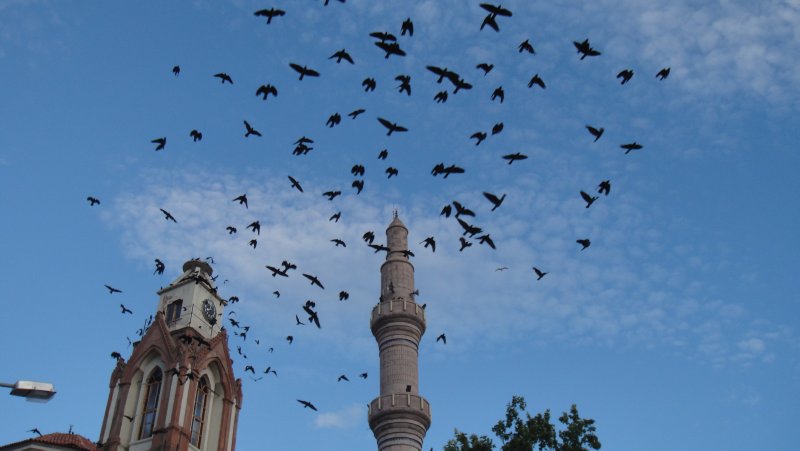 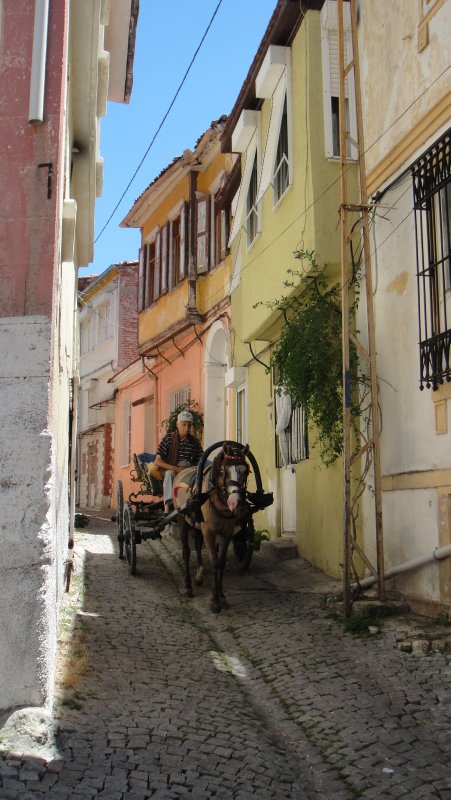 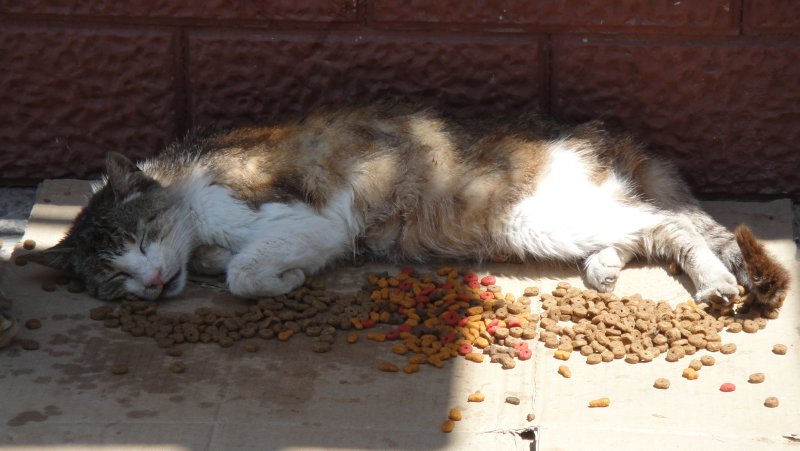 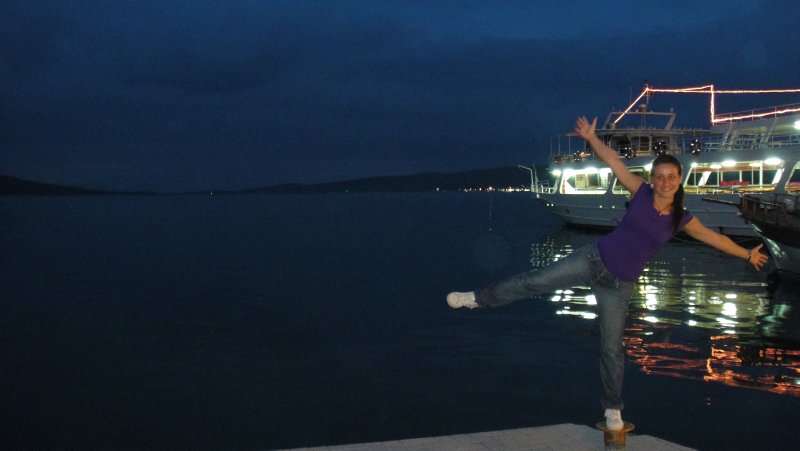 Ayşegül with the night sky in Ayvalik

Ayvalik was to be the last place I would visit in Turkey. Seventy-four days after I'd entered Turkey from Syria, I regretfully said goodbye to Turkey and Ayşegül and left on a ferry to the Greek island of Lesvos - which I'll tell you right now, ended up being a little disappointing for several reasons.

There are too many things about Turkey that I loved to mention (after all, I did stay there for almost three months), but here are some of them:

I can't think of anything bad about the country and I can definitely see myself visiting again - this time taking the time to visit the north and eastern parts of the country which are very different to the west.

Until my next destination... elveda!

I discovered your blog the other day while looking for images of the Taj Mahal and I just wanted to say that I've now read the entire thing and am hooked. Your photos and commentary on your trip is great and I'm really looking forward to more updates! I've been contemplating a trip like this myself for a long time, but for now I'll just have to live vicariously through you.

Out of curiosity, have any of the women you've come across mentioned how hard or easy it has been for them to travel alone? That's been one of the things holding me back from my own solo trip and I'd love to hear your/their thoughts.

I liked your story.